I just called Mother for a little chat and see if by any chance I could get some information on Louise, one of her guardian, friend and neighbour who has been admitted to hospital a week ago. She has full-blown cancer and six months to live. When I saw mother could not say any more last news about her friend, I decided not to ask any more question about the topic, even to the other guardian of Mother, Julienne, because a couple of days ago when I talked to her on the phone, she was crying as I was trying to start the conversation about that subject in order to know what was happening.
Mother needs guardians at home to supervise her as she does not always remember many things from one minute to the other one. She has Alzheimer. It all started fours years ago, with one of my brother and sister-in-law deciding to get mother in a Psychiatric department of the Hospital in Wolfe River for a mental health evaluation (MHE). In my opinion, she has probably been living with that disease for a while. I would say it started at least ten years ago when she started to adopt cats.

As we started the phone conversation, I asked her if she knew who was talking to her. She answered the phone herself and was quite enthusiastic, not being surprise to hear me and talking like we were very good friends. She said,  Yes of course I know who you are, you are my daughter. I was happy that she could still remember my voice and my name. I asked her how she was today on this special day of Easter. She was then surprise to hear that April had already made it and asked me to hold on a minute as she goes to the wall where the calendar is officially pined and turned the page from March to April.

– And which day are we?
– Saturday the forth, Mother.
– The Forth, already?
– Yes, and Easters is tomorrow, do i confirm her altogether.
– Easters, Easters, yes, Easters.

She then changed subject and started talking about one of her cat that is similar to some other one. 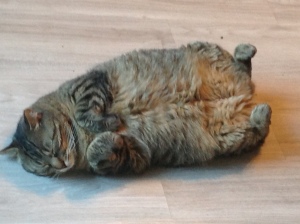 Mother love cats. She used to have more than a dozen of them. Her house was some kind of a Cat rescue resource, but instead of giving them away, she was caring for them. This is my Mother’s life story : caring for others, may it be cats or human beings. From my point of view, the cats stories is linked with the beginning of her memory lost and Alzheimer.  She was adopting any cats coming her way. Even people from other villages around were dropping cats in front of mother’s house, knowing she would care for them. At the end, She had cats all over the house and could not maintain the cleanliness of where she was living. The smell of cats’ excrement was more than I could support myself and she started getting mad at me because I was complaining about it arguing that is was bad for my health as much as for hers. To revenge herself, mother was insulting me by saying that because I was living in the city, I had become some kind of a Princess – know – it – all, and that her, because she was an old  poor woman who had been growing up in a pig house, would always be living in one. She was exaggerating in order to hurt me because I had somehow hurt her. This is the mean mother, but she is not always like that. This is around in 2002.

So after that, my visits to her became scarcely. Every time I would try to go and get some good moments with her, trying to help her because she was complaining about the fact that she needed help with washing her kitchen and getting right of all the old clothes she had, it would end up in fights and arguing about her not willing to let me do what she first asked me come for : helping her to clean her house. If i was not arguing with her, it would be with my brother who had been living with her most of his life. Because of all this, had I plan to stay for a week visit would be cut short for a two days one.

Today, she was insisting on telling me on the phone that she had a picture of a cat sticking on the fridge and that she had one just like that. When i asked her which cat it was, she could not tell. This is when I can tell that things are not going to well on her side. She has now three cats that she cherishes more that her own kids and grand kids. She loves them and gets upset if one of them goes outside of her house. So I asked her to describe me the picture of the cat she was seeing in order to see how were her perceptions of the picture and if she was going to be able to do it. I also wanted to know which cat she was talking about. So i asked her to describe the image she was seeing.
– It has a black line on its back and some black stripes on the sides as well, she says.
– Ok and what is the other colour that is not black?, was I asking her.
– Gray, it’s all Gray with black stripes.
– I see mother, so what is the name of that cat? i kept asking her.
– I don’t remember,  no more emotion than the fact that she just did not remember.
– Ok, so how many cats do you have? Have I continued.
But she keeps silent for a while, which i interpreted for « i don’t know ». I gave her the answer and started with some kind of a clue game to help her.

– So you have three cats, one of the cat has not tail, and its name start with A.

– Art! That’s Art, yes, he has no tail and likes to play all the time.
– Very good, yes that’s it. Another one’s name starts with C. it is a female cat with three colours : white with spots of black and orange. Mother kept silent once more. I add some other clues. Its name starts with a C + and o. I realized she might not be able to remember the sound of those two letters together so i say,« C +o is  Co »…
As soon as i say the sound syllable /ko/ she kept moving with the whole name :  « Cocotte  » said Mother.
– Yes, I repeated, yes it is Cocotte. I was happy she did remember this one too.
– Now what is the name of your third cat? It starts with V add i and r – it sounds like Vir…!
– Virule? Julienne in the background repeated loudly « Virgule » but mother did not hear it and she kept repeating over and over « Virule, Virule ».
– Almost, its name is Virgule, I told her. Now, this picture you have on your fridge, which cat looks like it?
– Virgule, she says, he is a big gray cat with black stripes and a long tail.
– Great Mother, you did good!

I ended the call soon after pretty happy of myself and of my Mother’s memory.

However, when i told that story to brother Luis, he said he was the one who had brought the article about obese cats and put in on the fridge, but the picture looked like Art, not Virgule.

Keep trying Mother. The exercise was worth it. It made me happy and is part of good memories I am keeping of us and of our conversations. I am actually writing these blog entries in order to remember her, us, the stories of our family. Because I know this is a life with fast pace and I am holding to those last years like only written words can.